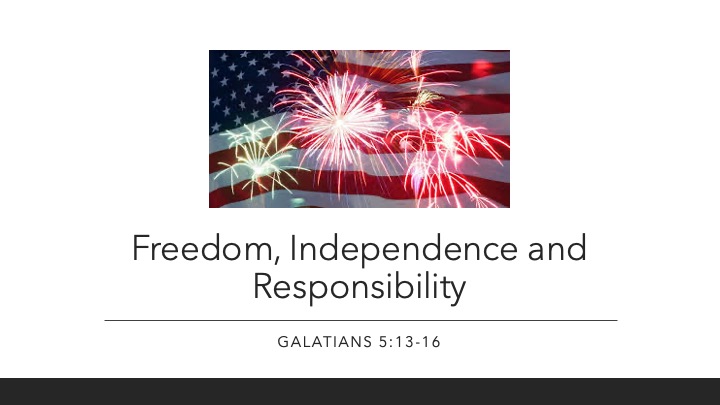 “For you were called to freedom, brothers. Only do not use your freedom as an opportunity for the flesh, but through love serve one another. For the whole law is fulfilled in one word, ‘You shall love your neighbor as yourself.’ But if you bite and devour one another, watch out that you are not consumed by one another” (Galatians 5:13-16).

On July 4th we will celebrate the 244th birthday of our beloved United States of America. A nation that was birthed with the revolutionary idea that “All men are created equal, and they are endowed by their Creator with certain unalienable rights, that among these are Life, Liberty and the pursuit of Happiness” (Declaration of Independence). It took revolution against the British Empire to establish independence. And it has taken nearly two-and-one-half centuries to pursue the full extent of “liberty and justice for all.” We have come a long way. But we still have a way to go.

As followers of Jesus we have a freedom that goes beyond government guarantee. We have a freedom that was bought with the price of Jesus’ blood. As Paul wrote, “For freedom Christ has set us free; stand firm therefore, and do not submit again to a yoke of slavery” (Galatians 5:1). Of course, Paul is referring to freedom from slavery to sin. A freedom that also makes us citizens of Heaven.

Let each of you look not only to his own interests, but also to the interests of others (Philippians 2:4).

The year 2020 has challenged much of what we have understood about freedom and independence. For three months we suspended gathered functions as a church. And even as we have begun to regather, we have done so with the utmost attention to our responsibility to be good neighbors.

We had hoped to be in position to return to Wednesday night gatherings during the month of July. But as the number of Covid-19 cases per day continues to rise in Jefferson County, we believe the responsible course of action is to hold off a while longer. Our Leadership Council will evaluate the situation in early July and keep you updated.

In the meantime, we will continue to hold our mid-week prayer service online via Zoom and Facebook. We will also continue gathering on Sunday mornings for worship at 10:30, following the Return to Gathered Worship Protocol. And we are excited to announce that sometime in July we will transition from a pre-recorded online worship experience to a true live-stream of the Sunday morning worship service. We are awaiting word from our vendor concerning an installation date for the equipment that will make this possible.